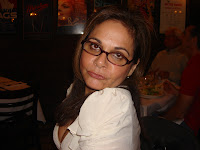 Post Harlem
The photo to the right is of me at The Palm restaurant in the Theater District in New York after seeing 'Hair' with friends from American Idol. (I know. I have no idea why I make that face in photos lately. Maybe I'm nervous that I might look a little too appealing to Stanley and have to queer it somehow before I actually have to think of something clever to say on a first date... Hee hee hee)
We met up with even more friends outside the Hirschfeld after hugging new friends backstage who performed in the show. Then we all walked up the Avenue to have late snacks and cocktails - me skipping alongside in my sexy Dolce & Gabana pumps. So fabulous and yet so... ow ow ow my feeeeet.
We were all gabbing and having a ball in the bar, crowing and cooing about the incredible talent and hard work in the "Hair' cast. Eating wings and bad bar food...with absolute relish! No slouch cooing going on with my friends - the likes of a successful NY writer/film-maker, a brilliant Broadway actress, one of the stars of 'Hair', in my opinion the hottest musical director and musical arranger and vocal coach from Idol, the hottest vocal coach in Los Angeles AND the hottest vocal coach in New York at our table doing the cooing. Oh, and of course there was me - the chick who does boys - voices that is, and who also just wanted to wrap the 'Hair' star in my arms and take her back home as my own.
"Look what followed me home! Can I keep her, pleeeeeeaaaassseeee?!"
In my five days in the city I saw a ton of amazing talent. From a rock band in Union Square on Sunday evening, to my friend Maile and her friends French Stewart and Laurie Metcalf - who were beyond hysterical, BEYOND hysterical in "Voice Lessons" on Theater Row that same night. To street dancers in Chelsea and then Debbie Gravitte who tore up Feinstein's Monday evening in a benefit performance for the Actor's Fund. To a fine Reggae band in Harlem I heard outside my restaurant on FDB on Tuesday morning having Cokes and dogs with my friend Geneva, who was showing me around, to finally the entire cast of "Hair."
I was feeling so good about possibly relocating there. Is it going to be Chelsea or the West Village or is it Harlem? Manhattan's a place filled with creative and talented people and I was going to be among them!!! Yay!!!!
And then Wednesday morning happened. Martha Stewart to be precise. Martha Freaking Stewart and her bridal show.
I wasn't sure I heard it right. I mean, I only caught it from the reflection of the TV in the hotel bathroom mirror. But I thought I heard Martha announce that coming up next was a woman who was a master crafter. I was confused. Master crafter, as in you had to be a journeyman crafter first? I'd have to wait until after the commercials - none of which I was on - so yeah, an eternity in actress years... Then this woman came on, looking cute, but nervous and a little like she lost a bet and had to do this segment.
This woman was going to show us all how to make the pipe cleaner rings that Martha and all the guests were wearing (all couples about to be married...so yeah...a lot of little Martha wanna bes with their very confused and embarrassed men clapping and shrieking for a chance to win something likely incredibly insignificant for their upcoming wedding.) My first thought was, since when do first graders get married, cause those are the only people I can think of who would wear crap like this. My second thought was...what did I just hear Martha ask her?!
Martha: Now, you're completely self-taught at pipe cleaner twisting, correct?
I would have sent the Master Crafter a case of Scotch, which she looked like she badly needed, if she had only answered: No, I had to go to fucking pipe cleaner college to learn this!!!!!!!
Instead she said: I am completely self-taught. I am self-taught at all my crafting. And I use only the finest of pipe cleaners, that I get from martha-stewart-dot-com. I wish I were joking. Can you get any more delusional? Completely bereft of any sense of what true talent and craft is? And then....THEN...we were treated to the craft of pipe cleaner ring making. And Martha couldn't do it. It was a shame really. Think how she could have kept herself so occupied and maybe put on a wedding or two while in prison. I know. Mean. But funny.
Crafting is not something to be mastered. That's like mastering bouncing. Although I will say that the bouncer at the Mercer seemed very talented and very crafty.
"Look what followed me home! Can I keep him, pleeeeeeaaaassseeee?!" No Candi! No more bouncers!
Talent is what was on stage at the Hirschfeld. Talent was in the streets. Talent was in a small theater on Theater Row. Talent is in our hospitals. In our classrooms. On our battlefields. Talent is in the home - where every parent is a star - whether making a bed, dinner or those stupid pipe cleaner rings for their kids to play wedding with.
Craft is what actors practice to make a living entertaining us with their personal illumination of the human condition. Craft is a singer reaching for a note and bringing us up there with her. Talent is the likes of Judy and Bette and Liza and Lena. Craft is Meryl and Marlee and Denzel and De Niro. Talent and craft go hand in hand. And neither should be confused with anything that is used to ream out a pipe.
You know you love me - Candi
Posted by Candi Milo at 4:56 PM

I swear, I'll never think of a pipe cleaner the same way again. Once again, Candi, you've made me smile.

I guess I missed my calling. A B.A. in English? Dang, I should've ditched that and gone after the piper cleaners! That is hysterical and depressing all at once. You have to laugh, but you also have to wonder how people can be so inane. Your defintions of talent and craft are spot-on Candi. Thanks again for the wisdom and laughter.