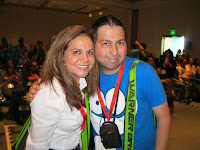 Candi: that's great that you had such a wonderful time, and with oodles of fantastic people. Chuck McCann and Sergio Aragones were a major part of my youthdom. Looks like I have to add a visit to Comic Con to my 'do before I keel over' list, right along with visits to the Grand Canyon and Griffith Park. You said it-creative people are the greatest, and and that includes you, too!

Hi All! I wish I could have written funnier about this. You are missing so much of what I still see burned behind my eyes every night! haha I had such a great time. It was truly a spectacle to behold. But I can't seem to bring the funny...I have had the stomach flu for about 4 days. Soooo no funny!

I am begging of every politician and idiot celebrity everywhere - - please somebody do something really stupid so I can write about it...

I still enjoyed reading the blog, even if you haven't been feeling your best. And as for permission of using the pic that was taken from my digital camera, you don't need it. I'm happy that you used it! Thanks for posting it, Candi. :)

With what's going on these days, I don't think you'll have to wait long for new material. Somewhere out there is a high profile lunkhead who will be perfect for another CandiBlog. Hope you feel better soon too, Candi. Stomach bugs are very unfun. Hang in there.

24 hours at the Con! What a whirlwind! I wanted to come by and say hi at some point but it was my first con and I missed so many things just in the process of trying to figure out where the heck I was and making my way back and forth through the sea of Hawkmen, Mario Brothers & Oatku to find the end of the 2-hour long line for room 275ABCDF. I loved it though! The cartoon voice panel was awesome...I wish I had a recording of that table read--it would be the perfect defense against comments like "voiceover must be so easy right? all you have to do is talk!" or "I've thought about doing voiceover to get me through in between actual acting gigs" (both things people have actually said to me) ... I'd hit play and say "Can you do this? No, you can't? Well then stuff it!" . . . what I really want to know is what did you get signed & by whom?