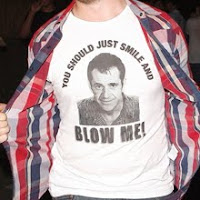 Oh Mel, You Sweet Talker You...
I hope her answer was, "I'll pass but, thanks honey! Do you want me to put our baby on the phone so you can say hi?"
I really wanted to be funny about Mel. I had it in mind to write about this since the first of the voice messages was made public. I was laughing to myself, picturing Mel ranting while dressed in James Caviezel's crucifixion costume.
But first I wanted to listen to them. The messages are online. I also could have listened to Tiger Woods' panicked message to his mistress saying his wife had found his phone and read the text messages from Jesse James to his mistress if I had wanted to. Just so you know. They are all out there. I didn't. Mel was enough, thankyouveddymuch.
His message, conversation, whatever it was made me sick. They are all sick messages. Twisted logically. Misogynistic. This to the mother of his daughter.
I have put it behind me, but Mel immediately brought to mind several similar ranting messages I received last December - also in front of my kid. A complete stranger called me repeatedly and screamed at me on my home voicemail - a lame attempt at bravado and threat - and sounded just as deranged, delusional and blame-laden as Mel.
Because I was consumed by all the other things going on in my life I thought, "ok fine. You got my unlisted number. You dialed it. You swore. You threatened. You keep forgetting to turn off your caller-ID. Yay for you. I'll take it from here." The content was nonsensical, nonlinear and delivered like a bipolar poodle who missed a Lithium dose. My girlfriends and I laughed about them and waited anxiously for the next one. They didn't scare me, clearly the intent of most raging lunatics, but they did make me sad, because they were a betrayal, an unforgivable betrayal because it meant I had to get a new phone number. And a new number meant I had to order new checks! Someone owes me $26.44. Hee hee...
I believe Karma is amazing and so never felt the need to retaliate, other than writing my blog. I knew the calls were the brainchild of someone who was caught not playing for team Candi, while still in team uniform. But hey, sticks and stones... (I know - 7th grade was longer ago for most of us - some people are still there and with cell phones.) I hope I get an invitation to their wedding. Better than that I want front row seats at the break-up! Ringside at The Garden!
Truly, my serial caller never reached the disgust level that the Gibson Gabs do. I remember thinking the messages, accusing me of everything under the sun and promising to make sure I paid, sounded so impotent...on many levels. wink wink That's also how I felt listening to Mel rant. The whiny bellowing over Oksana's obviously unnatural body parts ("No, really?!?!? Why don't you check out her lips!!!", his ex-wife is screaming on line 2.) and his insistence that she appear more modest - is hysterical in its "but this is likely exactly WHY you slept with her in the first place MEL!!!" double standard.
If you put a French accent on Mel - it would be like listening to Napoleon Bonaparte. "I am incredibly short. I have an incredibly teeny wee-wee. Everything I do is incredibly pure and just. And if you do not do as I say I will have an incredibly teeny tantrum! Or as I call it a teeny diatribe - a word STOLEN from the French!!!!!...wheeze...gasp wheeze...wheeze gasp..."
Life's too short and apparently so is Mel - for anyone to be be subjected to crap like this. I don't care HOW much money is involved. It is time for someone to lead Mel away in a lovely jacket with buckles in the back. And take away his damn Verizon calling card for crissakes...
Mel, from me to you. You left your wife for this woman. She turned out not to be what you wanted. Not her fault. It's ok. You made life choices, well you and Johnnie Walker, so your life is right where you led it. Handle the fallout over what you have done. If you don't, the guilt and confusion can cause this affliction known today as Robo-Ranting. Not a good thing where kids are involved. Not a good thing, period. I know, leaving a nasty voicemail for your ex about her boobs is kind of like drunk texting; wince-inducing but semi-forgivable. But when you talk about setting a house on fire? Go away, my friend.
As hard as jail time is going to be for Lindsay Lohan - it may end up saving her life and her career. Ask Robert Downey Jr. So, as career-destroying as it is being outed as a Napoleonic racist-sexist-lunaticist and being dumped by your agent - Mel you CAN rise again on the third day in a new career. Hopefully nothing that involves having to look at or listen to you. But only if you go away first. Far away.
And Oksana, for the sake of the kids, do what I did, change your number! And if you are concerned for the sake of your daughter - stop releasing these voicemails to the public. It doesn't do her any good.
Unless you have one of Mel playing Napoleon...how can that not be good?!?!?!?!?
You know you love me, Candi
Posted by Candi Milo at 11:45 AM

Candi: if there is any good that's come out of this grim affair, it's that Mel has left no doubt as to what kind of persona inhabits what passes for his mind. Unfortunately, I think we will be hearing and seeing more from him later on in the form of a teary "I'm Sooooo Sorry!" statement that will make him out to be the victim. Happily, the on/off/mute buttons work wonders here. Ignoring the ignoramus is the best possible punishment for him. Bye bye Mel, and good riddance! And Candi, here's hoping that jerk who's been bothering you will share the same rubber room with Mel.

To me, some of those voice recordings sounded doctored. Her voice sounded unnaturally calm - almost goading. But still - what lurks in his heart, his deepest thoughts, what he really feels about everything sits just below the surface and none of it is pretty.

I felt he sounded lost - bereft, knowing he is sliding away. They were too much to listen to. I felt so sad for him. Buuuuttttt don't want to know him...

As far as the serial caller, SHE is long gone. I changed my number. AND got new checks. I'm sure she's off somewhere in search of a pill splitter - to help get her dosage correct! :)

First of all, girl. How long did you date this guy who sounds like a big loser? Second, how did the woman get your number? Third, did you ever get that date with Stanley Tucci?

HAHAHA! Tirone - it was like a lifetime of hell in a year! Kidding. It was less than a year - and long distance. But yup, the fun just keeps coming! I will say I learned a lot from him - and deep down inside - deeeeeeep down way down past the narcissist - is a very sweet, gentle man.

To answer your question - she got my number from my ex and decided to give me a piece of whatever she had of her mind. Both of them - crazy!

Lastly, I have not had a date with Stanley Tucci. It is such a cute petition and a sweet idea - but as I have said, there only about 950,000 degrees of separation between us... And with all his fame and fortune, do you really think he is looking for me?

I think you are amazing and I believe that the bigger the star, the more they are looking for normal. I am an editor's assistant here in NY and I can't begin to tell you how many men would love to meet someone like you! I'm sorry your ex sold you out to a psycho. They are definitely out there. Apparently they are in Malibu, too! Take care. T

Yes - they are everywhere! Feelings of impotence, hurt and rage take many forms. I was disappointed more that anything else. It's all good. And I knooow that NY is the place to be - it's where all the best men are. Thank you for writing in! Candi