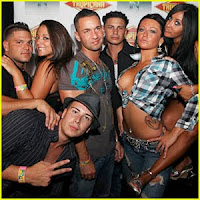 "I Learn From My Mistakes"
Of all the annoying things I read on people's 'about me' pages; whether it's Facebook or Match.Com or Linked In or any other number of social networking sites..."I learn from my mistakes"...THAT statement has to be my number one pet peeve.
Of COURSE you learn from your mistakes - you're supposed to! That's what being somewhat intelligent and sentient is about! You make a mistake. You know, like, ouch...fire burns...and you don't do it again. You get caught cheating... again ouch...spouse burns...and you don't do it again. You are allowed to make other mistakes - but not the same mistake over and over again. Except that is, on reality TV. There it is a plot point.
Sometimes I watch reality TV. I know. I can't help it, the programming is like a bad car wreck, you know you're not supposed to watch, so you squint your eyes and pretend to give them privacy, but you just gotta take a good, looooong look see, wow what happened here, kind of gander. And then you smugly sit back and go, what a bunch of maroons, and you say it exactly like Bugs Bunny.
A week or so ago, yes it took me this long to heal the searing of my brain, I was watching a combo of reality programming - in horror. We "Keep Up" (wink wink) with one show in our house because I have a teenage daughter who happens to be madly in love with all five of the girls on the show! Now this hugely successful show begat all these other wannabe shows - and they can't hold a candle to it. Trust me! They don't have the matriarch that the original has - a fearless woman who has been through hell and back and parents her girls with no bull! All the other shows try to copy their format - to extremely limited or zero success. But that doesn't seem to stop them, damn it!! No! The studios just clone away - using the shallow end of a lot of different gene pools...
There were multiple episodes of Pretty Wild (shoot me in the head), Jersey Shore (hey, I know these people...and I just got rid of a whole passel of them!!) Jerseylicious, The Real Housewives of Some Stupid City That I Don't Care About, and this other idiotic show I caught called Giuliana and Bill about a news reporter called Giuliana Rancic and her shell shocked husband Bill who were buying pirated handbags in China. (Did anyone else catch what Giuliana does for a living - I believe she is a reporter? And haven't there been a number of reports on pirated goods? Sigh...) This is why my business has GOT to pick up - because I cannot be trusted to be home during the day and not turn on the TV.
From A to Z or as I prefer to think of it - A to DD - Reality TV people are the biggest collection of idiots on the planet. Go away, Kate! Go away! Take Snookie with you! If you could slip them into those little plastic sleeves you could probably sell the whole set for a fortune on EBay! Idiots - not only for the lifestyle choices and the biggest faux pas, to have their choices filmed - but for making the same mistakes over and over again. And not learning!!!
Here's an idea! Hello!!! Jersey Shore cast? Want to know what not to do? Watch Pretty Wild on E! These are your Dopplegangers only without any morals - oh wait - never mind on that one - and in skimpy clothing and bad California accents. What is a California accent you ask? I'm glad you did. A bad California accent is where every sentence begins with the word shopping and ends with the word whatever. They are also not aspiring actresses - like you're not Italian - so you'd be perfect. Maybe you can share a manager. I hear Joe Simpson is available these days.
Real Housewives of Whatever City I Don't Give Two Figs About? Grab a mirror from IKEA. They're on sale. Take a hard look in it. Ask yourself this question before you leave the house every day: Are You Sure? The answer is NO!!!!!!! if you are wearing anything sparkly in the middle of the day....or...check the label for this next one...anything with more than 10% Spandex, Lycra or Orlon...or...anything that shows us anything on your body that not even your husbands want to see - you must immediately return to your closets and change clothes. I bet that if they wore normal clothes we would listen to what they had to say. And we'd realize it was nothing. And we'd turn it off.
Because even when we are as young as kindergardeners - we see what they can't seem to figure out. A five-year-old can see it. Fire! Don't touch it! It burns! I imagine toddlers everywhere hurling their bottles at their HDTV's and screaming, "Situation! Get a real name, a shirt, a job and a life."
You know you love me. Candi
p.s. To the woman in Greensboro, North Carolina - shame on you. Go away. Karma Chameleon, sister.
Posted by Candi Milo at 2:59 PM

Garbage like this, they keep, yet cancel Bonnie Hunt. What the hell is wrong with this equation???

Carol Burnett also said that reality TV is sealing the coffin on the kind of shows we used to love when TV was worth a damn. All the shows you mentioned are ghastly, but JERSEY SHORE is tops in my crosshairs. It's bad enough that my adopted home state (I'm a New Yorker by birth, though only for the first three years of my life)is the butt of a jillion bad jokes. Now these cretins add more manure to the fire. I'm glad that New Jersey has had some positive impact on the arts, be it through Jack Nicholson, Susan Sarandon, Count Basie, The Smithereens, or all the great jazz musicians that Rudy Van Gelder has recorded at his Hackensack and Englewood Cliffs studios over the years. Hopefully, the JERSEY SHORE/JERSEYLICIOUS crowd will crawl back under whatever rocks begat them real soon, and take the rest of the reality TV 'stars' with them. Yecch!!!!

If I'm going to watch reality TV I want to learn how to do something, or watch someone overcome something, or accomplish something. Tanning, drinking, shopping and bailing your children out of jail for robbery is not my idea of doing anything!!!

I read that same Carol Burnett article - with Tim Conway - and TV is officially dead.

Just so you know, I left about 25 shows out of my equation. Just too dumb for words!!!!!

There are a few non-scripted shows that do show people doing more than just being morons, mostly on Discovery-MYTHBUSTERS, DIRTY JOBS, DEADLIEST CATCH, etc. But those are the exceptions. It looks like what Byron Haskin said about TV in 1983 is even more applicable these days: "It isn't even the amusement business anymore, it's the world of advertising- and any relation to honest drama is purely coincidental." And it's even worse now.